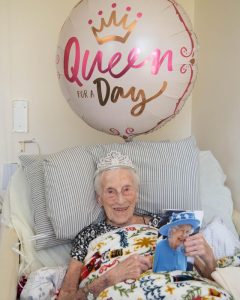 When Lois Hall was born, the First World War was still raging and the Easter Rising was taking place against British rule in Ireland.

And 106 years later, she is still going strong and celebrated her birthday with a special meal of lobster at Highlands Care Home in Fitzgerald Road, Woodbridge.

The former Ipswich Art School pupil, who has her own Facebook page, received a message from the Queen to congratulate her on her milestone, just a couple of months before the Monarch herself celebrates a landmark, her Platinum Jubilee.

She also has another claim to fame, having edited the film Lolita, as well as having worked with the pop star Cliff Richard and actor Gregory Peck.

Indeed, the former Northgate High School pupil in Ipswich was an assistant film editor on feature films for 15 years, working at different studios in the London area, including Ealing, Elstree, Pinewood and Shepperton.

Her interests include art, books and writing, while she also enjoys most sports, especially golf and tennis.

She also enjoys walking and has spent time travelling, having spent winters camping in Spain, Portugal and Morocco.

The former pupil at the Royal College of Art in London has also been married twice; the first time to a man named Frederick and the second time to John Hall.

Of the secret to a long life, she said: “I have always been very active and been conscious of what I have eaten.”